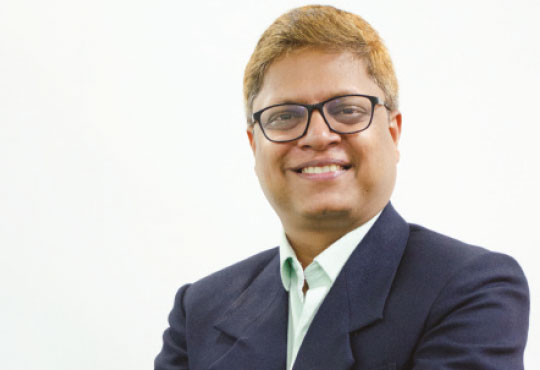 The blockchain is an in­dubitably intelligent invention; it is the res­olution to a question we've been asking since the advent of the inter­net age – how to have peer-to-peer transactions, without involving an intermediary. Blockchain technology created the backbone for a new type of internet. Don & Alex Tapscott, au­thor of Blockchain Revolution (2016) said, “The blockchain is an incorrupt­ible digital ledger of economic trans­actions that can be programmed to record not just financial transactions but virtually everything of value.” Erudition held on a blockchain exists as a shared — and at-times regulated — database. This is a way of using the network that has distinct benefits. The blockchain database isn’t stored in any single location, meaning the records it keeps are truly public and easily prov­able. The basic tenets of Blockchain – shared ledger, smart contracts, trust and immutability - lend themselves as a strong foundation for disruption in varied set of industries. I am yet to come across an industry that can potentially not be disrupted by using these principles of Blockchain.

Think about a blockchain as a distributed database that maintains a shared list of records. These records are called blocks, and each encrypted block of code contains the history of every block that came before it with time stamped transaction data down to the second. In effect, chaining those blocks together.

One of the most important con­cept of Blockchain, and which is also at the core of the most prominent implementation of Blockchain – Bit­coin, is transfer of value. Transferring of value from one party to another through software alone, without any human intervention, is in itself revo­lutionary. This concept can be utilized by many industries, not just for re­cording transfer of value, but also for tracking the history of transactions. It opens numerous possibilities ranging from fraud prevention (by virtue of finding the genuineness of a product by tracking its journey from origina­tion to final ownership), to supply chain management. When combined with the power of Internet of Things, this could be­come a potent tool to bridge the gap between trust on controlled environ­ment transportation of perishables and mistrust due to human intervention at points of transfer of such goods.

Blockchain can also act as a bridge between islands of information with­out actually compromising or dupli­cating such information. By storing blocks of information that are identical across its network it potentially cuts out the middleman for these types of transactions. All this by providing reference to the data store without ac­tually storing the data – sounds great, doesn’t it? Data storage, in any case, is not the recommended objective of a Blockchain, rather transactions are.

The other important concept of Blockchain is Smart Contracts. Smart­ness of which is limited to the imagi­nation of their creator. For example, a derivative could be paid out when a financial instrument meets a specific standard, by application of blockchain technology and Bitcoin letting the payout to be automated. These are best suited for use cases having a prede­fined outcome based on the sequence of certain events. Real time payment settlements and automatic distribu­tion of royalty among stakeholders are just a few simplistic use cases of Smart Contracts; however, the use cases can be extended to real time assimilation of clinical trial result without any fudg­ing, or for broadcasting warning in real time about an impending natural calamity like tornado or tsunami.

Smart Contracts have potential application in addressing one of the biggest problems plaguing the world – Corruption – by tracking the flow of value (in the form of aid, grant - mon­ey or in kind) from the benefactor to beneficiary. Given the tracking of this flow of value is transparent and immu­table (cannot be fudged with, by virtue of being on a Blockchain), it is easy to reconcile whether (and how much of) the aid/grant has reached the intended recipient.

Identity management is another area that shall see a sea change. There would be solutions in future that would allow users to prove their iden­tity just using an internet connected device. For instance, why should all these details are divulged when the need is only for age proof? In future, there shall be no need to carry any of the identification documents. Once taken at a global level (that shall require a lot of coordination and standard op­erating procedures) physical passports could become a thing of the past and Visas could just reside on Blockchain based application. Imagine the explicit advantages of suburbanising file stor­age on the internet. It protects files, passport and visa etc from getting hacked or lost. Such an amendment is not only convenient but it’s a vital as­cent to the web’s currently oppressed content-delivery systems. Such systems could also help keep a tab on one of the greatest risks to humanity – Terrorism. All this would have a potential to drive a social change thereby impacting soci­eties at large.

Some of these might seem far­fetched today but there are expected to be tremendous changes in near future by 2020 that would bring these goals nearer.

With advent of Blockchain applica­tions in general and smart contracts in particular, lots of businesses that have thrived on charges for mediation, face the challenge of being disrupted. They are sitting on a Volcano and it’s just a matter of time that this Volcano erupts.

It is thus imperative, that the busi­nesses sit up, and start taking a note of Blockchain. CTOs and CIOs have a choice - either look at this technol­ogy aggressively and pro-actively to transform their business and create a moat, or wait for their business to get disrupted.

Possibilities are infinite, yet choices are only two.

IT services
SAP Business One Guide_V2